I’ve made it to the end of the fall semester… what better food to accompany me through finals than some soothing and creamy baked potato soup. I also really wanted to give my Crockpot another shot after last week’s disaster.

Step 1: Chop potatoes into small sections. This photo (left) is just one potato. I worried that two potatoes wouldn’t be enough- I was wrong!

Step 2: I had no idea what “real bacon pieces” meant or how to find them at the grocery store. Apparently, they’re like bacon bits but not really. So I saved myself the headache and bought microwavable bacon, which I then shredded into little pieces (much like my hopes and dreams during finals week). Pictured below: me, preparing for last rounds and finals. 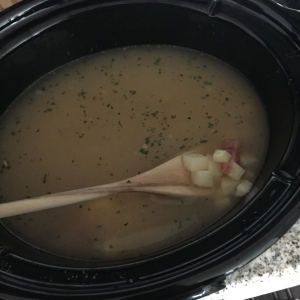 Step 3: Combine potato chunks, cream of chicken soup, ranch seasoning (I used half of the packet instead of the full) and the box of chicken stock into the Crockpot.

Step 4: Let Crockpot do it’s thang for 4-6 hours. Then, during the last 30 minutes, add the block of cream cheese.

What I was left with were tiny clumps of cream cheese in my soup. The texture was off and I couldn’t bring myself to continue eating a soup with chunky cream cheese. It’s a texture thing, really. Like staring at little cottage cheese chunks floating in your food. It had me feeling a lot like Mr. Cowell. 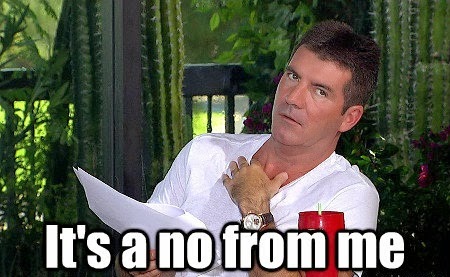 Beside that fact, the soup had good flavor. The ranch seasoning was good- though still a bit overpowering with only half a packet. Definitely a more sour version of potato soup.